How To Get Rid of Bully Hummingbirds

Whether you’re a new birder or you’ve been feeding and watching birds for years, you’ve probably encountered a bully hummingbird. Despite their small size, hummingbirds have proven to be surprisingly aggressive at times. While this behavior may seem entertaining at first, it can make feeding these birds a challenge.

If you’ve ever dealt with this, you know how difficult it can be to feed your hummers peacefully without interruption by a bully. In fact, it can be downright disheartening to watch your efforts go to waste. Luckily, there are several ways you can minimize this aggressive behavior at your hummingbird feeders.

Why Do Hummingbirds Fight?

Some hummingbird species have a stronger reputation of aggression than others. In particular, people often recognize the Rufous Hummingbird for its temper. Territorial behavior at feeders is usually stronger in male hummingbirds than in females.

So how can you recognize this behavior? Territorial aggression presents itself in a number of different ways:

Some of these actions, such as aggressive sounds and body language, are merely warnings, while others, such as fighting, are downright violent. Typically, hummingbirds start with the least aggressive behavior and escalates it from there if the “invader” doesn’t leave. Although each behavior may be different, they are all an attempt to ward off unwanted visitors.

How to Stop Territorial Behavior 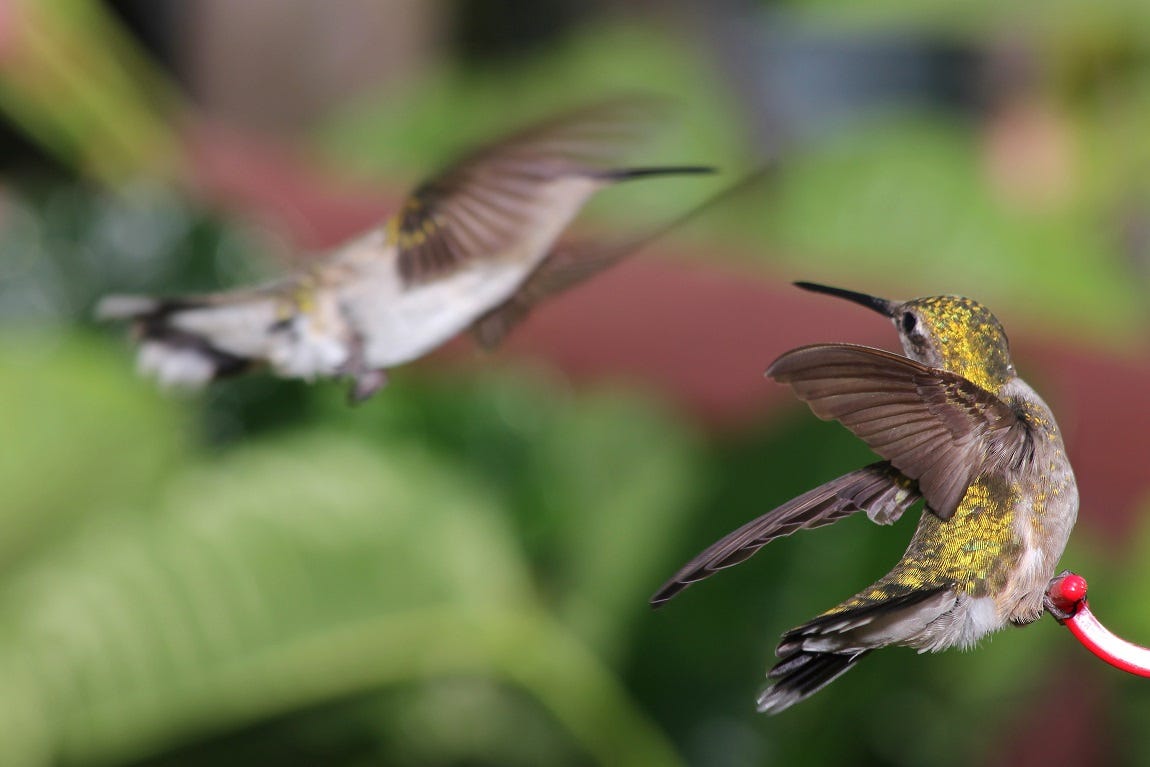 An old rule of thumb when it came to addressing bully hummingbirds was to separate the feeders from each other. However, by placing feeders in separate areas, you may be encouraging more bullies to claim their territory. The real answer to hummingbird harmony is to add more hummingbird feeders to your collection and place them in clusters around your yard.

By creating more feeding zones, some of which will be out of sight of the others, a dominant hummingbird cannot defend a particular feeder. Additionally, the fighting and feeding sounds that hummingbirds make will attract more hummingbirds to your yard, and ultimately your feeders.

Long-time hummingbird bander and one of Alabama’s foremost bird experts, Bob Sargent, suggests to start increasing the numbers of hummingbird feeders that you are offering around July 4th. This is when nesting is ending and the first southbound migrants are beginning to arrive in large numbers.

If you have one hummingbird that is a common bully, it’s also a good idea to locate their favorite hiding spot. Bully hummingbirds usually stake out a spot that allows a good vantage point of their territory so they can easily defend it. Try removing the perch or pruning the branch that they typically use. This will help to prevent them from chasing away other hummingbirds that try to feed.

Don’t forget that by having multiple feeders, you must be more diligent about regular cleaning to ward off disease and prohibit nectar from spoiling. Sargent also suggests that it is not necessary to completely fill the feeders until you start seeing feeders go empty. The empty feeders will be a telltale sign that larger numbers of hummers are feeding in your yard.

To get more great tips and birding advice, join Perky-Pet® on Facebook. Also, be sure to sign up for our e-newsletter, which will clue you in on stories from the birding community and alert you of exclusive deals on your favorite Perky-Pet® products.

Keep Your Hummingbirds Happy with Perky-Pet®