The store will not work correctly in the case when cookies are disabled.
Pet Deal Breakers

Have you ever taken your dog somewhere on purpose, knowing your cute pet’s charms will attract the attention of equally cute people? It’s honestly not that unheard of. The presence of a pet in your life could swing a relationship in your favor – or not. Some other kinds of pets send partners packing.

But what works or doesn’t work? We asked 1,000 people about their pets, particularly if they’d ever dated someone because of a pet. What things did they find creepy or cute? What was an absolute deal breaker in the relationship? Continue reading to find out. 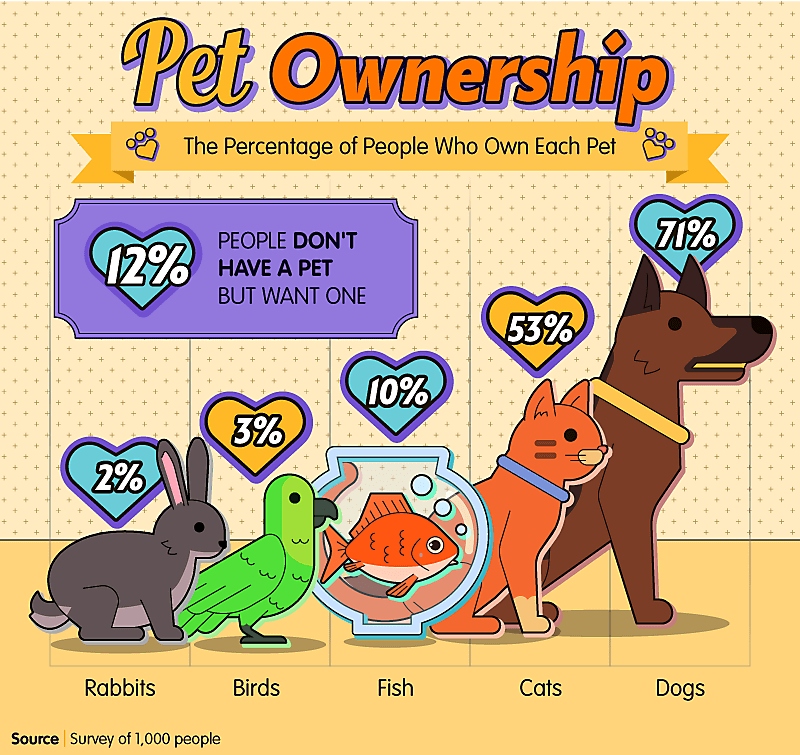 Out of the people surveyed, 71 percent were dog owners and just over 50 percent owned cats. Surveys show that while more families have dogs, the total number of cats in the U.S. outnumbers dogs. It’s pretty evenly split between getting pets from shelters or friends and relatives – but 49 percent of respondents found a shelter rescue sexier than buying a purebred animal.

No matter the study, cats and dogs were, by far, the most popular companions, providing stress relief, unconditional love, and devotion. Fish earned third in popularity at 10 percent – they are easier to care for, after all – followed by birds and rabbits. Inviting a pet into your life is so common that 12 percent of participants said they didn’t have a pet but wished they did. 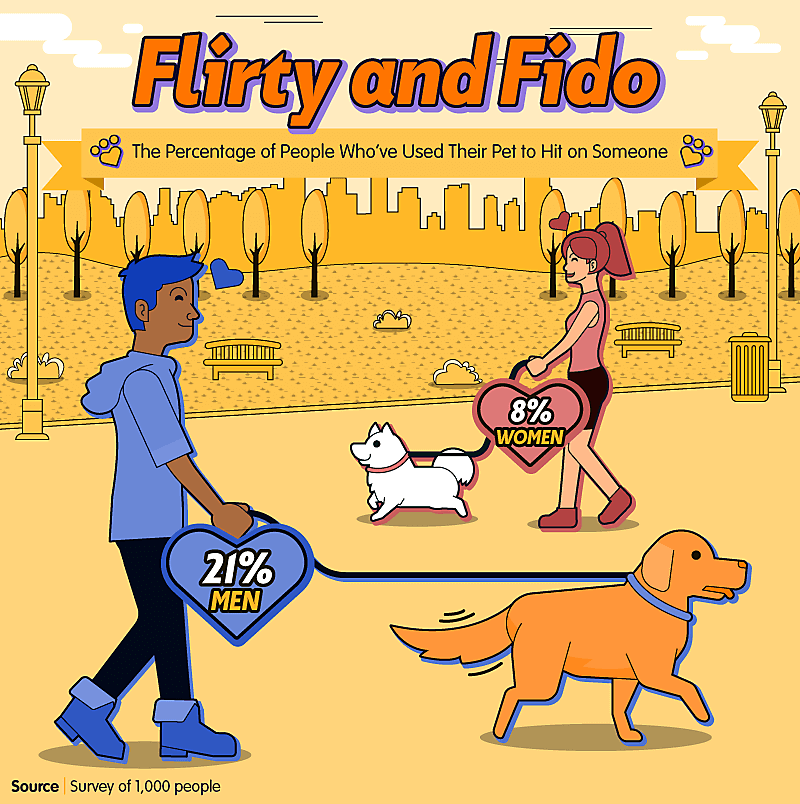 You know you’re guilty of it. You’re out shopping, running in the park, or walking on the beach, and you see the most adorable creature on four legs happily trotting alongside someone. You make a beeline for the dog, ask to pet him or her, and in the process, get to know the owner.

It’s a pretty popular attention-grabbing tactic. Of the people surveyed, 21 percent of men admitted to using their pet to hit on someone or grab someone’s attention. Only 8 percent of women, however, did the same. 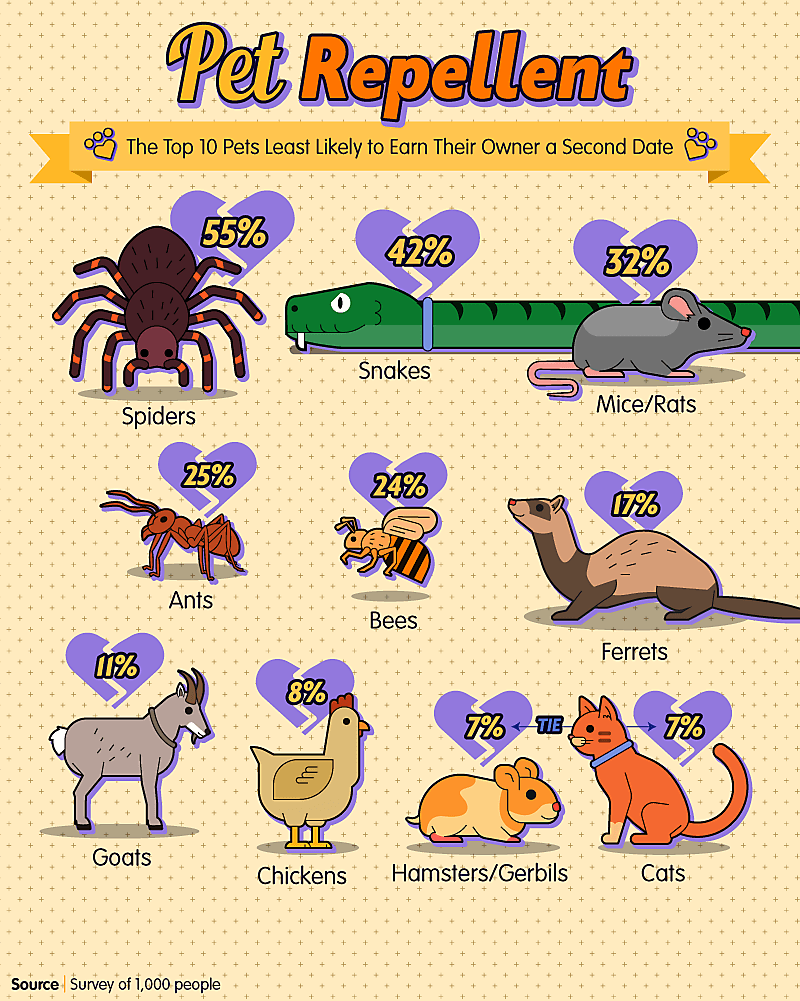 Picture this: You’re on your first date with a new interest. Maybe it comes up in conversation. Maybe you go to their place, and then find out. But one way or another, the truth comes out, and it’s as if they’ve sprayed a Relationship Repellant in your face. Fifty-five percent of all respondents said they would not go on another date with someone who kept pet spiders. Snakes were a date breaker at 42 percent, with mice and rats following at 32 percent.

After that, the list started getting smaller with ant colonies and bees keeping away potential partners. Many respondents said they were just too creeped out or repulsed by the “creepy-crawly” type of pets. Some said they were truly terrified of the critters and wanted desperately to stay away, even if the animals’ reputation was worse than reality. Bad PR can go a long way. 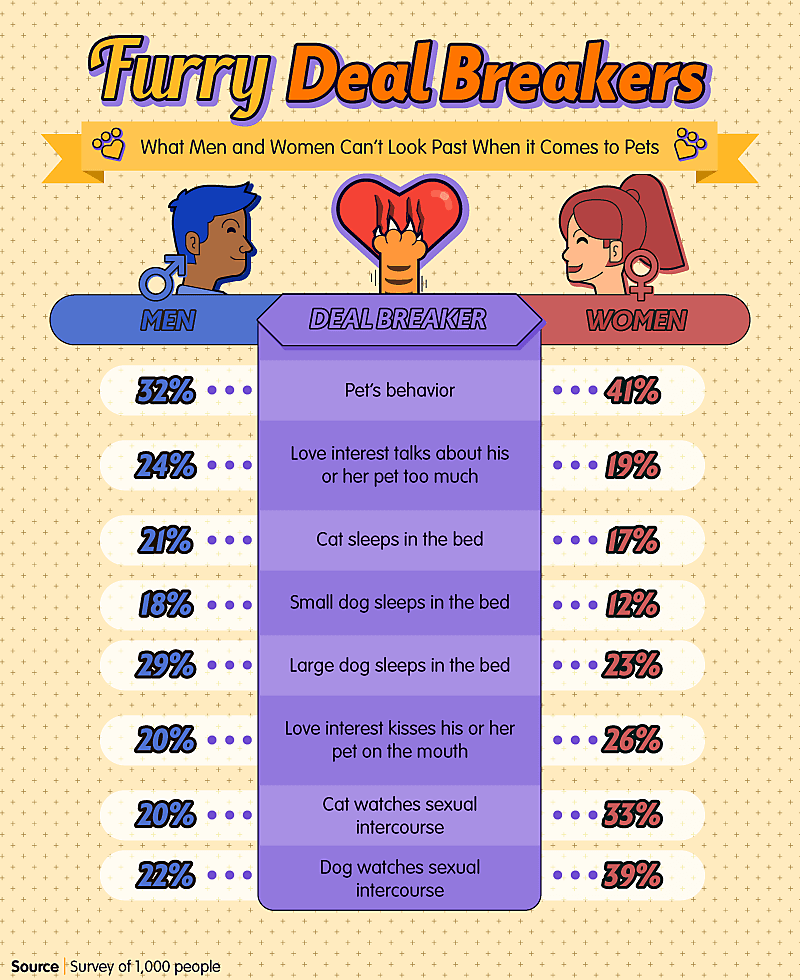 Well, they got your attention with their pet – congratulations, you’re now in a relationship with said pet owner. But what happens when things go wrong? We asked people what qualified as a relationship deal breaker when it came to pets. Both men (32 percent) and women (41 percent) expressed concerns about pet behavior. Overall, 31 percent of respondents saw pet behavior as a reflection of the owner.

Some other issues were pretty even – what about a cat or dog sharing a bed with you? More women than men were uncomfortable with their partner kissing their pet on the mouth, for example, though 54 percent of total respondents said they would allow a dog to kiss their face.

When it came to sex, the deal breakers were much more solid. Thirty-three percent of women refused to let a cat watch, and 39 percent refused to let a dog watch. Men didn’t mind as much – only 20 percent were uncomfortable with cats watching and 22 percent with dogs. Some things were just meant to be kept private – even from pets. 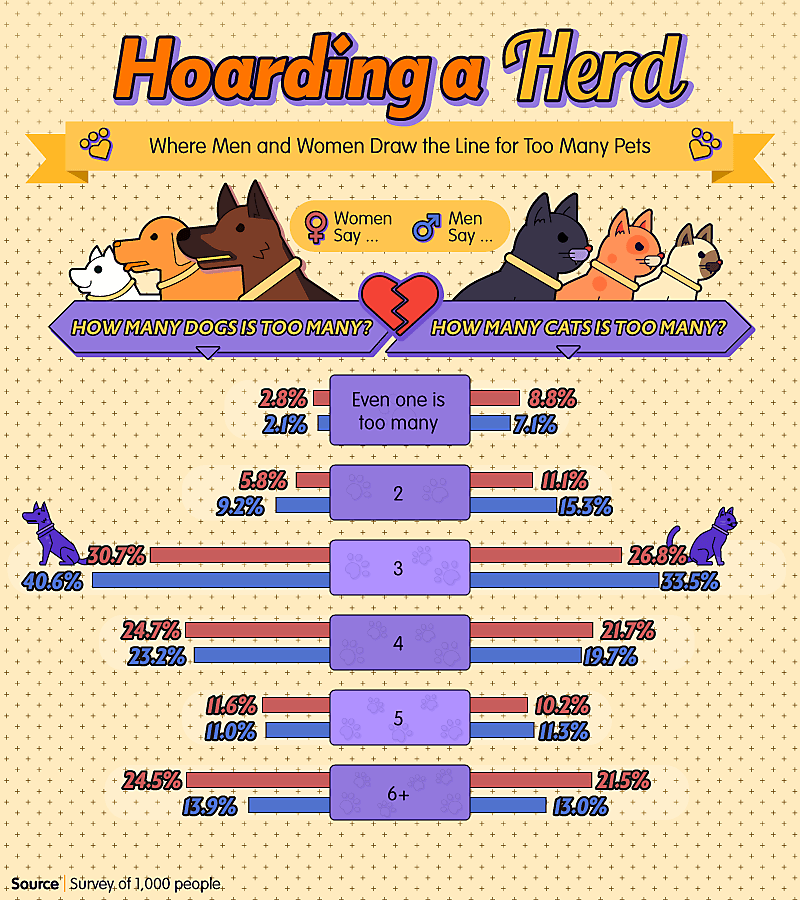 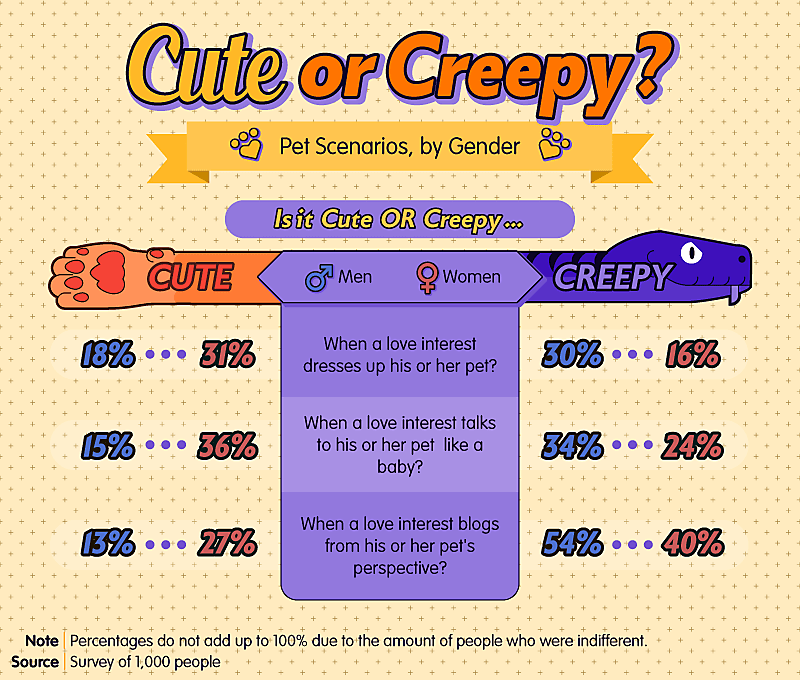 When it came to fur children – er, pets – there were a whole plethora of scenarios that ranged from cute to creepy. In every category, women found dressing pets, talking to pets like children, or even creating blogs or Instagram accounts for their pets more cute than men did. What could be more adorable? 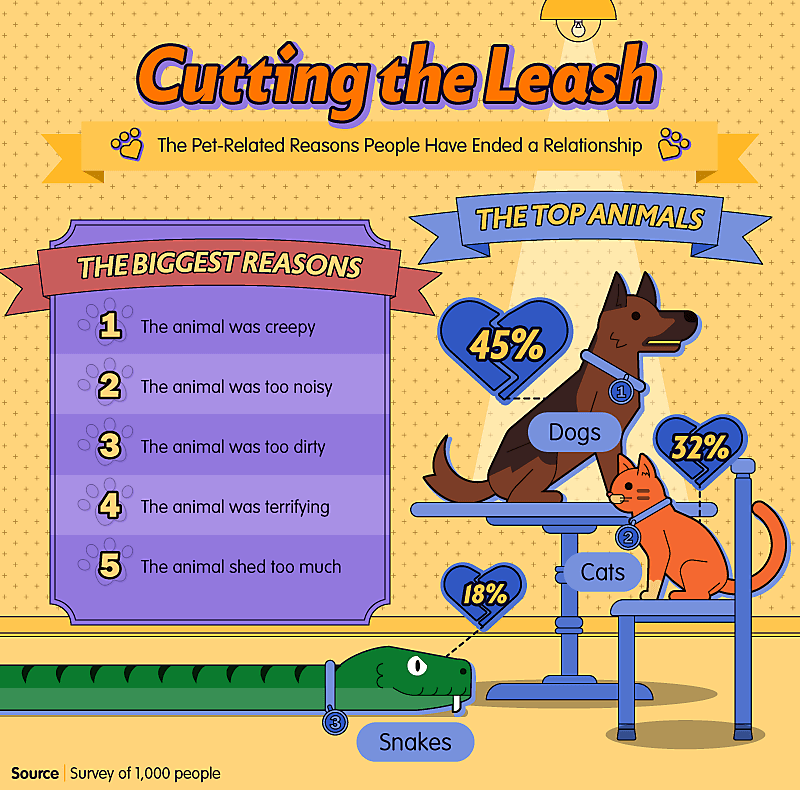 While women tended to be more open to some of the scenarios previously mentioned, sometimes enough is enough.

Among the people who ended a relationship because of a pet, the No. 1 reason was that the animal was creepy. Maybe the animal stuck around during some intimate moments or their owner dressed them up in themed outfits. Whatever the case, creepiness played a part.

The rest of the reasons listed could have possibly been prevented or controlled by the owner. For instance, training and proper grooming could have potentially kept the romance alive.

So what animals took the blame? Forty-five percent of participants blamed the dog, while 32 percent blamed misbehaving cats. Snakes came in third, with 18 percent causing the end of a relationship. Sssssorry.

However you look at it, pets are a huge part of our life. While dogs are more popular, there are more cats around, so learning to deal with them (especially if you’re not a cat person) is something to factor into any relationship. In a relationship or friendship, it’s important to know your limits, whether that’s on how many pets are allowed in the house, or which kinds of pets are allowed in the house. Woodstream Brands has tools for all of that, from bird feeders to attract birds to traps and tools to keep unwanted critters away.

We surveyed 1,000 people about their pets, pet habits, and how pets played a role in their dating and love life.

Itching to share this with someone? Go for it, as long as it’s for noncommercial uses. We just ask that you link back to the authors of this page so readers can check out the full study and methodology.